Image Caption: A protest known as the Sunflower Revolution gave rise to a consensus-building social network

There is one thing that practically everyone can agree on: politics has become bitterly divided.

Whether it is the daily Brexit face-offs, the endless scandals on Capitol Hill or the yellow vests of France, the space for meaningful compromise has dramatically shrunk. Instead, it’s a time of digging in, fighting your corner, staying the course. No surrender.

Yet what if it doesn’t need to be this way? What if new ways can be found to break deadlocks and bring electorates back together?

Thousands of miles from the controversies around Trump and exiting the EU, a solution may have been found. For the last five years, Taiwan has been blending technology with politics to create a new way of making decisions. And with certain limits, it has found consensus where none seemed to exist.

It began in 2014, when Taiwan was split by a trade bill. As in Hong Kong today, many feared the law would bring their country closer to China. Protestors entered its parliament and started a weeks-long occupation that became known as the Sunflower Revolution because they used the flower to represent a symbol of hope.

“I was there the night before they burst in,” Audrey Tang told me.

She was a leading member of Taiwan’s burgeoning scene of civic hackers who joined the protests.

And in the wake of the occupation, the government asked for their help.

Some of the civic hackers were invited to join the government and Tang became Taiwan’s digital minister.

Their aim was to design a new process that people from across political divides could join and express their views. But crucially, the process had to produce a consensus that the government could turn into new laws and regulations.

Their creation was called vTaiwan – with the “v” standing for virtual – a platform where experts and other interested parties can deliberate contentious issues.

It works by first seeking to crowdsource objective facts from those involved.

Then users communicate with each other via a dedicated social media network called Pol.is, which lets them draft statements about how a matter should be solved, and respond to others’ suggestions by either agreeing or disagreeing with them.

Once a “rough consensus” has been reached, livestreamed or face-to-face meetings are organised so that participants can write out specific recommendations.

The platform’s first test was to regulate Uber.

The ride-hailing service was expanding quickly in Taiwan, angering the traditional taxi industry as the US firm did not require its drivers to have a professional licence or the same type of insurance, and was not paying the same taxes as local firms. Customers, however, enjoyed cheaper fares and added convenience.

To break the deadlock, vTaiwan invited groups from across the debate to join its online space.

Pol.is lifted everyone out of their echo chambers. It churned through the many axes of agreements and disagreements and drew a map to show everyone exactly where they were in the debate.

There was no reply button, so people couldn’t troll each other’s posts. And rather than showing the messages that divided each of the four groups, Pol.is simply made them invisible.

It gave oxygen instead to statements that found support across different groups as well as within them.

“Change the information structure,” Colin Megill, one of its founders, told me, “and you can tweak power”.

Technically, the tweak was small, but politically its effect was enormous.

Rather than encourage grandstanding or the trading of insults, it gamified finding consensus. 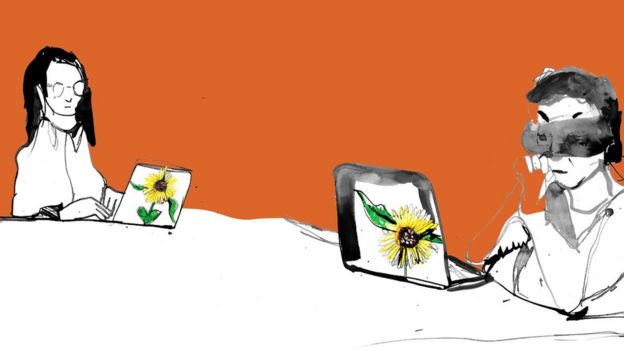 “People compete to bring up the most nuanced statements that can win most people across,” Tang told me.

“They spend far more time discovering their commonalities rather than going down a rabbit hole on a particular issue.”

The debate continued and as people drafted more nuanced statements Pol.is showed that the four groups had became two.

“Invariably, within three weeks or four,” Tang told me, “we always find a shape where most people agree on most of the statements, most of the time.”

After a month, “consensus items” emerged, that enjoyed near-unanimous support.

One, with 95% support across all groups, read: “The government should leverage this opportunity to challenge the taxi industry to improve their management and quality control systems so that drivers and riders would enjoy the same quality service as Uber.”

In July this year, I saw vTaiwan in action on another disruptive technology – e-vehicle regulation.

The process had reached the final meeting stage and organisers had made efforts to put attendees in a co-operative mood.

The room was softly lit, everyone ate food together and the only issues on the table were those Pol.is had already identified as those that most people agreed with.

This was completely different from simply asking them to vote via an app. vTaiwan gave participants the agenda-setting power not just to determine the answer, but also define the question. And it didn’t aim to find a majority of one side over another, but achieve consensus across them.

As divisions were turned into consensuses, the government could act. New regulation was passed allowing Uber to operate with licensed drivers, and regular taxis to use apps.

And after Uber, it has been used to set the agenda for 11 pieces of law and regulation, with eight more waiting to be voted on, on everything from the regulation of online alcohol sales, fin-tech regulation to new laws on revenge pornography.

But there may be limitations.

vTaiwan has not yet been tested on an issue of real, national division, much less one that is already entrenched. And there are still fears that an online process could exclude less digitally savvy groups.

However, Taiwan’s experiment may have a tremendously valuable lesson for us all.

Democracy does not have to be fossilised or frozen in any particular form. The ones that evolve may be the ones that survive, even flourish, in a world where the pressures and challenges they face are surely changing just as quickly.

Coronavirus: Call for apps to get fake Covid-19 news button