The LSE study finds that less than 40 per cent of news organisations have a dedicated AI strategy. Now it is the time to collaborate on best practices

A new report published this week (18 November 2019) looking at the intersection of AI and journalism has issued a warning to global newsrooms: collaborate with your competitors or face extinction.

The study, ‘New powers, new responsibilities. A global survey of journalism and artificial intelligence’ is a joint project between Polis, the international journalism think-tank at London School of Economics and Political Science, and the Google News Initiative, who has funded the research.

It surveyed 71 international news organisations on their on use of artificial intelligence for editorial purposes across a seven-month period, showing that just 37 per cent of them have a dedicated AI strategy.

Charlie Beckett, director, Polis, London School of Economics and Political Science, said that newsrooms have between two and five years to develop a meaningful strategy, or risk fading out of the digital landscape.

“This is a marathon, not a sprint – but they’ve got to start running now,” he said.

“You’ve got two years to start running and at least working out your route and if you’re not active within five years, you’re going to lose the window of opportunity. If you miss that, you’ll be too late.”

Less than 40% of the organisation have a strategy. 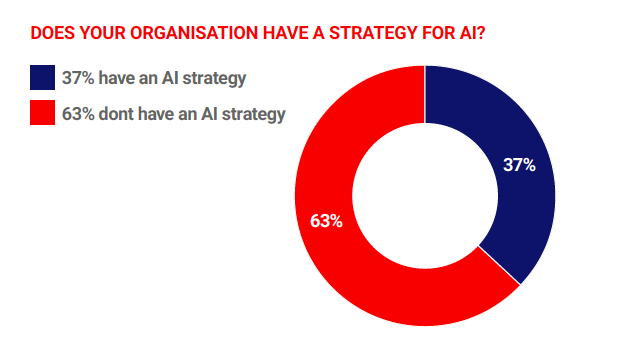 Even by the lowest possible trajectory, the rate of which natural language processing, translations, text generations and deep-fakes are developing means that newsrooms cannot afford to drag their heels, as the knowledge gap will only widen.

“Deepfakes have already accelerated in the last six months from a something in lab to something kids in Macedonia can churn out. I’m not trying to panic people – the report stresses the positivity of AI – but there is a real sense of urgency here,” he explained.

“It’s really clear if you look at other industries that AI is shaping customer behaviour. People expect personalisation, be that in retail or housing, for production, supply or content creation. They use AI because of the efficiencies that it generates and how it enhances the services or products it offers.

“So if we, as journalists, are going to be living in that world, journalism is going to look very dumb if it doesn’t have those capabilities. If journalism doesn’t get its act together, worse than looking antiquated, it won’t be looked at at all.”

Despite these alarm bells, integrating AI into editorial process can have a range of benefits, including taking the burden out of long-winded tasks and sifting through large databases to produce local stories.

While many global newsrooms like Reuters News are quite advanced in this field, integrating significant cultural and operational changes is challenging for cash-strapped local and regional newsrooms.

The report details that many newsrooms struggle because of those financial limitations, but also because of lack of expertise, managerial strategy and time to prioritise AI, as well as scepticism around the technology. Some of these concerns touch on established arguments around algorithmic bias, filter bubbles and the influence of machine learning over editorial decisions.

The report also offers an eight-step pathway to integrating AI in newsrooms, even for those starting from scratch. It starts with assessing readiness of AI right through to creating task-specific roles with AI resources. But dialogue and exchanging best practices from those in similar circumstances are also important.

Networking is not just a nice idea though, it can be a commercial arrangement.

“It could be a developing a good machine learning program, saying ‘Can we benefit by selling this onto other newsrooms, so others can also benefit?’ Or sharing data so you can train data better to develop better newsroom tools.

“When you train natural language processing you need a big dataset of images. One newsroom may not have that – are there opportunities for newsrooms to get together and share these tools and benefit? It’s not altruism, it’s called benign self-interest.”

Not co-operating, he argues, will lead to mutual self-destruction. But he is already seeing early signs of co-operation, recognising that competitors face common issues. Only by tackling the problem together can they resume their rivalry.

“To have healthy competition, you need healthy business,” said Beckett.

“Get the tech right, then that will allow you to focus much harder on what you do differently and best, and how your editorial product is different to your competitors.”

Ultimately, he said that AI will be neither the saviour nor the demise of journalism. But it will at least allow local journalists to leave their newsdesk more often and do more field work.

“If you’ve ever worked in a local newsroom, you know there are people who can’t leave the office because they are churning out stories.

“They are losing the very idea of being local, which is going out into the streets, to meet people and to interact with your community. This is to augment and to power-up journalism, it’s not about journalism turning into a bland robotic product, it’s about getting back to distinctive journalism.”

Image by: NeONBRAND on Unsplash